That would be me.

I recently read via the that when you feel jealous, usually that means there’s something else going on with yourself and that jealousy is a good indicator that perhaps you should be doing something more or differently than you already are. Apparently it makes a heck of a good motivational tool, too.

I can see how that could be.

So right now I’m working on this project that’s fairly cool. It’s an indie. The writing is decent! It really is. It could be CONSIDERABLY worse knowing the load of crap that’s out there..but the real selling points are the idea, characters and the whole premise of the story in general.

Anyway, on every project, there are always the more experienced and less experienced actors. Luckily, all of the actors attached to this project are very talented and I’m not just saying that. This blog is anonymous, after all. And on this particular project, I happen to float right in between experience-wise. Talent-wise, I’m obviously not one to be able to judge.

There is however a girl (there’s always a girl) who is a couple leagues ahead of me in relation to where she’s at in her career. For one, she’s represented by a pretty decent agency in the city. She’s got projects on the go, she writes her own material to star in, she’s extremely confident in who she is as a person and actor.

Plus, I used to be the centre of the producer’s attention and now I’ve been cast aside! Okay, so that might be a slight exaggeration…but I’m a needy actress and sometimes that’s how it feels. Whether it’s actually true or not, which it probably isn’t. It’s just what my envy-fogged brain interprets. Especially when I’m now always tagged last in twitter mentions!!

I KNOW. I’m clearly insane. It’s TWITTER, for God’s sakes. WHO CARES! Right? I mean I highly doubt the producers seriously put into consideration who they tag first. These are just the kind of crazy thoughts that pop into my head when I’m feeling extra insecure. Ugh. Gross.

Raging, irrational jealousy that makes me hate myself and sometimes want to kick things and cry. Over-dramatic, you say? I’m an actress, I say.

Anyway, there’s nothing wrong with her as a person. It’s not like she’s arrogant or stuck up, which would give me the perfect reason to hate her. Nope. She’s perfectly nice, albeit a bit awkward in a Kristen Stewart sort of way. It’s part of her charm, really.

Sigh. Girl just really has her shit together (as opposed to myself, obviously). 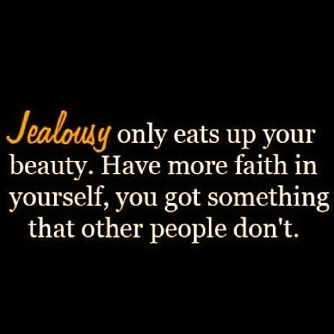 On top of that she’s acted opposite of a couple B-list actors in bit roles- yes, I realize it’s a little sad that bit roles get me this worked up but that’s the reality of it at this point in my career. And soon, she will be making her big television debut in a co-star role with (rumour has it) slight promise of becoming a recurring. An episode that she is pretty much the focus of for the entire hour. GAH. This is a very internationally popular series, by the way…some people around the world are already tweeting her about it. Sigh.

She is undoubtedly talented. It’s not that I’m NOT happy for her. I am! I’m also really proud of the fact that this is someone I also get to call a co-star. I whole-heartedly believe everyone in the acting community should be supportive of each other because if not us, who else? Who else gets it besides those of us who live it every day? We need all the support we can get! I truly do believe that.

And I have been supportive. Very. Extremely. Vocally. I’ve even recorded the episode ahead of time to show my support! …and critique for comparison…possibly. Look, deep down, my heart is in the right place! It’s just not always easy, but I’m working on it.

So those comments on The Struggling Actress got me thinking that I ..no, that I definitely need to step my game up. Jealousy stagnates you. It stagnates your spirit, all motivation and progress. You get stuck in this perpetual spiral of negativity and jealousy. Really, instead of asking myself, “Why can’t that be me?” I should be asking myself, “Why ISN’T that me?” and do something about it.

There’s always going to be someone better looking than you and more talented (sadly) but if you choose to focus on that, you’ve already taken your eye off the ball. You’ve lost the plot and set yourself back, while the person you are jealous of just keeps moving up and ahead in life. I’m my own worst enemy when it comes to this. But at least i’m aware of it. 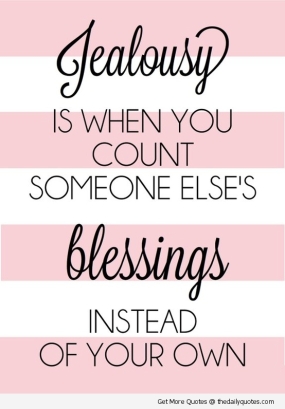 So now I’m here promising myself that I will consciously channel all of this raging jealousy and negative energy towards doing the things that are going to get me to where she is now (and beyond). Because god knows she probably worked her ass off to get there and deserves it.

Sometimes things are easier said then done…I’ll probably have a lapse in attitude when I watch said debut episode, but I’m determined to snap myself out of it and use it towards something positive. To quote a fellow  (thank you):

“Don’t get jealous! Get awesomer.”

And even though the photo above talks about ‘good friends’, what it should say is “Actors don’t let jealousy get in the way of celebrating each other’s successes”.