This doesn’t really have much to do with anything per se, but I just spent my morning re-watching The Perks of Being a Wallflower movie and just HAD to say this.

I’M IN LOVE WITH LOGAN LERMAN.

And it sounds ridiculous even to me because I have never ever ever understood fandom and fan-girling over actors. I’m not one to really swoon and obsess, also he’s younger than I am and I know he’s kinda short. But damn. I CAN’T HELP MYSELF!! There’s something about his eyes. Sigh.

So there. I just had to get that out there. I love him. He’s awesome. At the very least, I would love to work with him one day. Girl can dream. It’ll happen.

But on a different note, Perks of Being a Wallflower is probably one of my current favourite movies. It’s the kind of movie I would’ve so connected with (even more) when I was in high school. It would’ve been nice to have that. It touched upon a lot of issues that I think many teens and young adults can relate to. Having to deal with your sexuality as a teenager and what that means, how prevalent sexual abuse is and its emotional impacts, emotional/mental abuse in relationships, physical abuse, experimenting with drugs, the loneliness of being a teenager or an outsider, the loneliness you can feel no matter how many people you’re surrounded by if they don’t understand you, complex relationship dynamics between friends, family and lovers, mental illness, rejection, the list goes on. I don’t know how he did it but the director (Stephen Chbosky) managed to capture such depth within the story and in all the characters that while I was watching it I felt like I was there, like those could’ve been my friends, that could’ve been me. It probably was.

I also don’t have enough praises to sing about the actors. Everybody did a phenomenal job. Not ever in a scene was a character flat, boring or one-dimensional and they also managed to stay believable throughout the whole movie- which is not always easy to do when it comes to such a relatively young cast. And even though Emma Watson’s accent does get a little shaky (also what American uses the word shag? I wonder if she ad-libbed that one), the emotions were there, and you could see that she was there for her co-stars emotionally through the vulnerable moments, and that’s really what matters at the end. 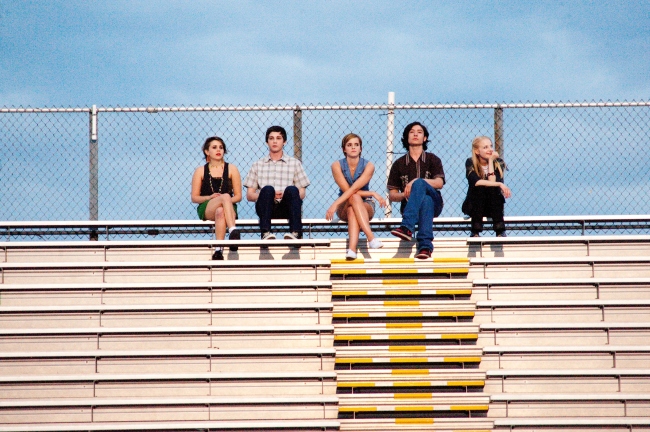 Of course to tie the story and characters all together, the soundtrack was just impeccably put together. Every track held the essence of the scenes and just elevated the entire emotional impact of the movie for me. It took me along on its journey. In fact, I have the soundtrack on coloured vinyl. It really is amazing. You know a soundtrack is good when every song brings you back to an exact moment in the exact scene from the movie.

I also appreciate the fact that the movie took its time, it wasn’t rushed or dragged. I didn’t leave full of questions about apparent plot holes or character inconsistencies. So many movies these days have such great ideas but for whatever reason (actors? script? music?) just never quite arrive “there” with me emotionally. I know the impact they’re trying to make, but they often time fall short, the story feels empty. So it’s a nice to see a movie that does make it happen. A movie that isn’t just made for entertainment, but is a story that effectively illustrates and highlights parts of humanity, and manages to make it relatable to its viewers. That’s what movies are supposed to be about, aren’t they? Dissecting humanity and the human experience and giving us an up-close look.

I do wish, however, that they’d left Nina Dobrev’s abortion scenes in the movie. It showed such a sweet and touching dynamic between brother and sister. It also would’ve really helped in illustrating the chemistry between herself and Logan as siblings that I think was a bit lacking in the movie cause she was hardly in it. It’s also nice to see that Nina is capable of showing a slightly broader range and playing a character outside of the one on The Vampire Diaries. From what I understand this was a ratings issue, so I do understand. And there’s always the director’s cut!

So that is all I have to say. Perks is a beautifully vulnerable movie that I would recommend to anyone. If you haven’t seen it or read the book, do give it a go when you have the chance. I promise you, you won’t regret it. It also gives me hope as an actor that there is still meaningful material out there, and hopefully I’ll have the luck of getting to be a part of those projects one day soon.

2 thoughts on “Perks of Being a Wallflower + Logan Lerman”